On a recent visit to Visakhapatnam, M Venkaiah Naidu enjoyed a breakfast of innovative conical idlis, wrapped in vistharaku leaves, and made by Chittem Sudheer from nine varieties of organic millets grown in the tribal belt of Paderu

Chittem Sudheer was in for a surprise on Wednesday morning. Busy serving millet idlis to a long queue of customers at Vasena Poli stall at Waltair Uplands, Visakhapatnam, Sudheer was taken aback when a special breakfast order came from the Vice President of India, M Venkaiah Naidu.

The Vice President, who was on a visit to Visakhapatnam this week, took to Twitter after his meal. He tweeted: ‘Had a sumptuous breakfast of millet idlis today made by ‘Vasena Poli’ stall run by a young agri-entrepreneur Chittem Sudheer in Visakhapatnam. With a rich flavour and taste, such millet based food offer a healthy and organic alternative to our diet… Such innovative efforts by our youth to go back to our traditional diet & lifestyle are commendable.’ The tweet quickly went viral. 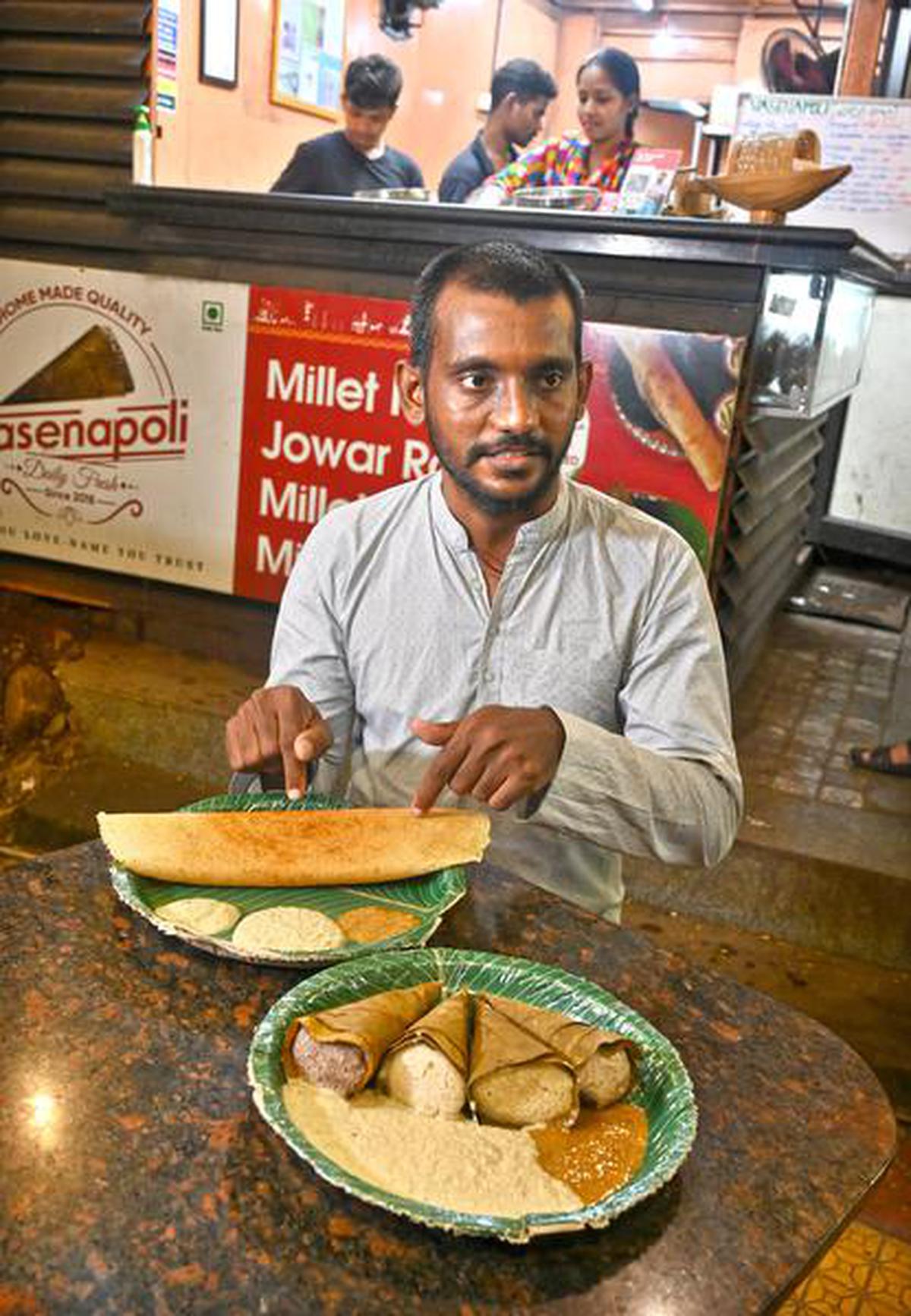 What started off as a small home-based enterprise in 2018 has today turned into a well-loved city landmark. A post graduate in agriculture economics, 28-year-old Sudheer launched his first food stall of Vasena Poli last year and has been on his toes ever since, catering to a rising demand for his millet idlis. “There is a greater awareness for shifting to millet-based food, especially after the pandemic,” he says. Every day, he gets more than 200 orders from his millet idlis and dosas. Now, his daily sales total about Rs 15,000.

His menu includes millet dosa, jowar roti with curry and millet cake (prepared with a mix of two or more millets). The dosas and curries are prepared with cold pressed sesame oil.

Stating that he recently switched to unpolished black urad dal to make his idlis and dosas more nutritious, Sudheer says he keeps tweaking recipes to ensure balance. “The right combination of millets provides holistic nutrition. Millets are full of anti-oxidants, vitamins, minerals and are also high on fibre content,” he says. Before embarking on his entrepreneurial journey, Sudheer spent time with the tribals in Srikakulam, studying organic farming practices and learning about traditional millets grown in the region. He collaborated with the Acharya NG Ranga Agricultural University in Guntur where he first experimented with idlis. 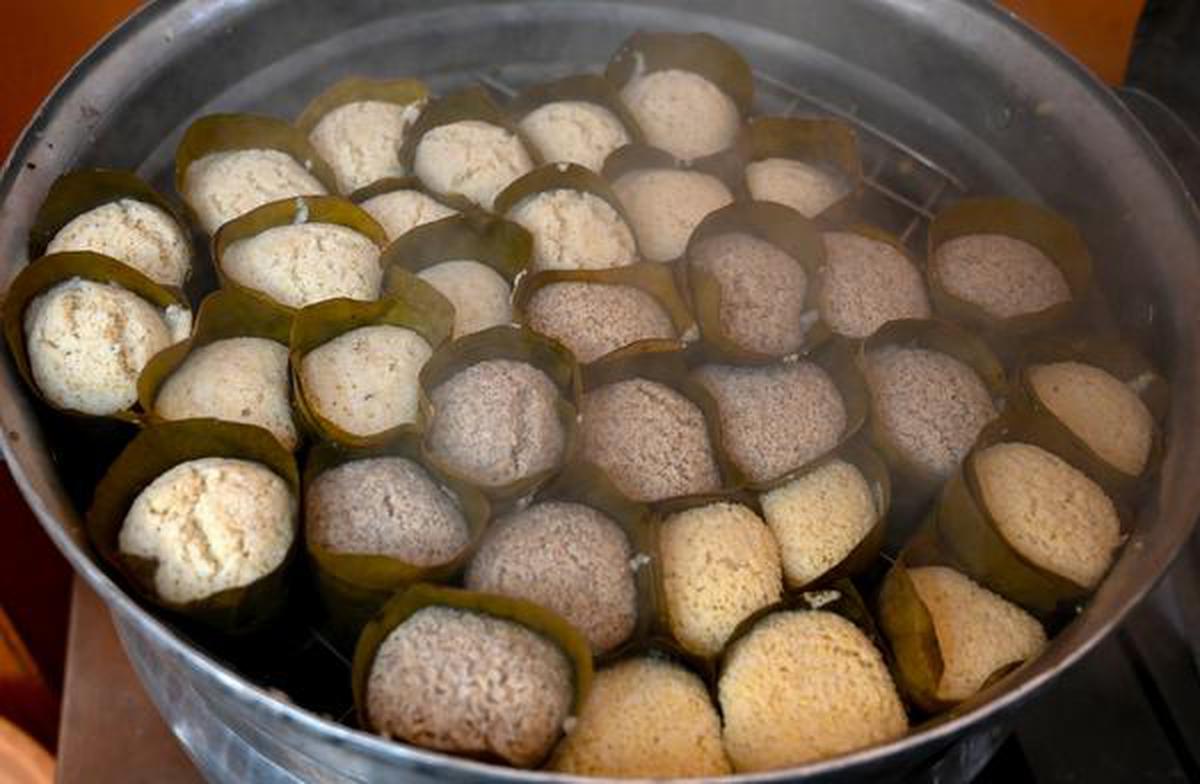 Sudheer gets nine varieties of millets from Paderu, a tribal belt in Visakhapatnam district and Parvathipuram in Vizianagaram district, where they are organically grown by the tribal farmers. Daily about 10 to 15 kilogram of millets are used to make the fresh batter. “We make the batter in two batches — once in the morning and once in the evening — so that it is fresh,” he says.

The vistharaku leaf gives his idlis a unique flavour. “It also has antibacterial and antiseptic qualities,” says Sudheer. Given the rising demand for his idlis, he needs about 2,000 vistharaku leaves every alternate day from Paderu, which has become a challenge. “Rains have affected the production and supply of the leaves. Paderu is a remote region with limited network connectivity. There have been days when the leaves were out of stock and I could not open my stall,” he states.

While innovation in millet based food is a subject close to his heart, Sudheer also wants to support the tribal farmers and the organic agricultural practices. “I am in the process of bringing together the tribal farmers of Paderu to start and register as a Farmer Producer Company (a hybrid between cooperative societies and private limited companies) to get prices for their crops. The registration process will be done in January. I am also encouraging them to grow black pepper, groundnut, tamarind, red kidney bean, apart from millets.” With the national spotlight on him after the Vice President’s tweet, Sudheer has been flooded with requests for expansions through the franchise route. “I eventually want to expand and take my enterprise to other cities. But I want to take it slow and keep my focus on quality control to build a brand,” he adds.